The Hunter Commission, trying the Lincoln conspirators for murder, meets for the first time. 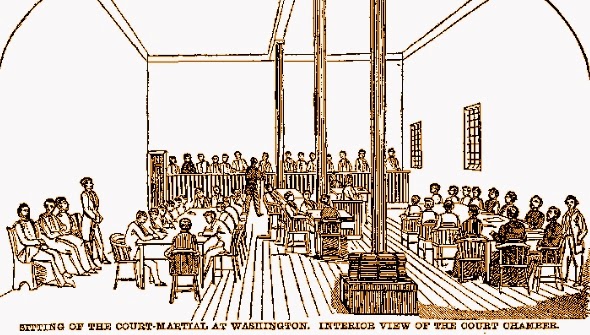 The trial of the Lincoln conspirators has come in for harsh criticism, both in its own day and down to today. By any realistic application of the term “Due Process” all the Lincoln defendants were denied any and all of their Constitutional rights. Prior to the trial, the defendants were kept isolated, imprisoned in horrific conditions, and abused in ways meant to break their minds and wills.


It was not until the evening of May 9th that each prisoner was visited and had the charges and specifications lodged against them read out.  General John Hantranft later wrote:


"I had the[ir] hood[s] removed, entered the cell alone with a lantern, delivered the copy, and allowed them time to read it, and in several instances, by request read the copy to them, before replacing the hood."


Given the fact that the prisoners had been kept in blind darkness for days the lantern must have seemed like the fires of hell in their tiny cells. It was only at this late hour that the Defendants were asked if they wished to have legal Counsel appointed. Who knows what they understood?  By any measure except that of the worst totalitarian States, they were utterly denied all their rights to confer with Counsel and to mount a rational defense or defenses.


Actual testimony would begin in the Lincoln assassination conspiracy trial on May 12. 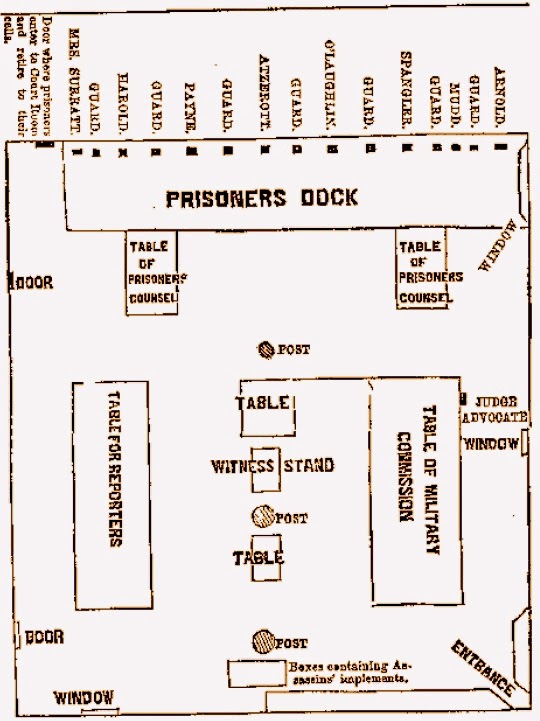 The rules of the Commission made the position of the defendants even more grave: conviction could come on a simple majority vote and a majority of two-thirds could impose the death sentence.


Over the course of the next seven weeks, the Commission would hear from 371 witnesses.  An active civilian audience would punctuate the trial with unsolicited and inflammatory remarks. And through it all, business --- the business of convicting the accused --- would go on without an eyeblink. 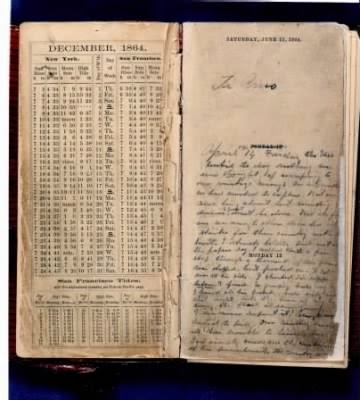 Evidence was hidden from the Defendants’ Counsel, particularly a diary kept by John Wilkes Booth that would have exonerated most of the Defendants. The Chief Prosecutor for the United States, Joseph Holt, never disclosed the existence of the diary, and conflated the two Booth-inspired plots against President Lincoln --- the kidnapping and the shooting, respectively --- into a single plot. He also, with little evidence, attempted to implicate Jefferson Davis into the conspiracy.


No doubt the guilty were convicted, but so were, undoubtedly, the innocent. The conciliatory spirit of Abraham Lincoln would find no rest in that courtroom, but the creature that had been Edwin McMasters Stanton would rage unchecked in what was, for the Defendants, a long, hot summer. Their last. 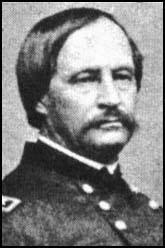 President Andrew Johnson, in a Proclamation announcing that any remaining Confederate vessels on the High Seas were to be considered pirate vessels, inadvertently declared the Civil War at an end.  In fact, he was somewhat premature.


By the President of the United States of America


Whereas armed resistance to the authority of this Government in the said insurrectionary States may be regarded as virtually at an end, [emphasis added by this blogger] and the persons by whom that resistance, as well as the operations of insurgent cruisers, was directed are fugitives or captives; and


Whereas it is understood that some of those cruisers are still infesting the high seas and others are preparing to capture, burn, and destroy vessels of the United States:


Now, therefore, be it known that I, Andrew Johnson, President of the United States, hereby enjoin all naval, military, and civil officers of the United States diligently to endeavor, by all lawful means, to arrest the said cruisers and to bring them into a port of the United States, in order that they may be prevented from committing further depredations on commerce and that the persons on board of them may no longer enjoy impunity for their crimes.


And I do further proclaim and declare that if, after a reasonable time shall have elapsed for this proclamation to become known in the ports of nations claiming to have been neutrals, the said insurgent cruisers and the persons on board of them shall continue to receive hospitality in the said ports, this Government will deem itself justified in refusing hospitality to the public vessels of such nations in ports of the United States and in adopting such other measures as may be deemed advisable toward vindicating the national sovereignty.


In witness whereof I have hereunto set my hand and caused the seal of the United States to be affixed.


Done at the city of Washington, this 10th day of May, A. D. 1865, and of the Independence of the United States of America the eighty-ninth. 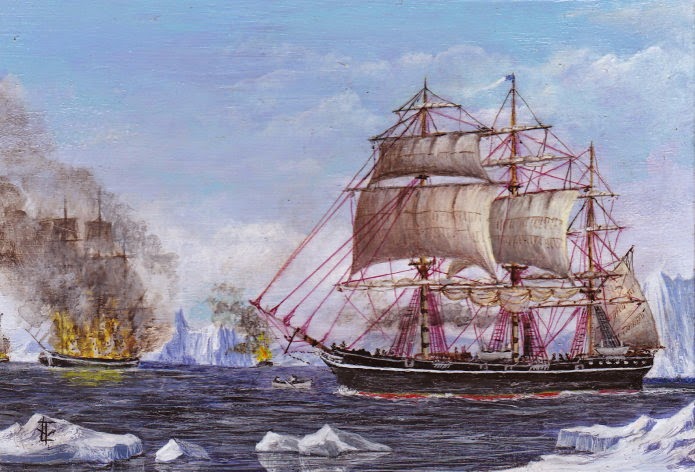 
Jefferson Davis is captured by Union troops under the command of Colonel James Wilson near Irwinville, Georgia, during the early hours of May 10, 1865, during a driving rainstorm. The Confederate President’s string of luck has finally broken.

Davis’ chances of escape (whether to Florida or the Trans-Mississippi) had dwindled from near nil to utterly nil when he had chosen to stay with his wife and children as “Mrs. Jones” and her party moved oh so slowly southward.

Davis never admitted to the defeat of the Confederacy, but his decision to stay near his family in order to use whatever dwindling authority he may have had in order to dissuade former Confederates at large from raiding his wife’s caravan was an intrinsic admission that the larger contest was over and that his duty was now to his family. So, his decision on the seventh to forego his own escape to protect Varina and the little ones from harm was in effect his own white flag.


Not that Davis would have admitted it to himself that way.


Late on the night of the ninth, the Davis entourage --- shrunken to the family, slaves, friends and associates, and a mere 65 soldiers --- camped in a hard rain some five miles from Irwinville, Georgia. It was such a filthy night that Davis did not bother to post guards, risking that the Yankees would not be out on patrol in such conditions.

So when he heard hoofbeats and cries after 2:00 A.M. he assumed the long-awaited former Confederate raiders had arrived. Davis, who had been sleeping in his clothes against such a chance, stepped out of the tent he shared with Varina planning to parley with his former soldiery. He was stunned to see men in blue hitting the camp.


“Federal cavalry!” he gasped as he darted back in the tent. Varina implored him to flee.


There are several versions of what happened next:


In the first version, Davis grabbed for his rain poncho, slipping it over himself, though in the dark he could not see that he had grabbed Varina’s daintily-flowered one. Unable to find his hat, Varina tossed a shawl over his head, and Davis ran . . . only to be caught by Federal troopers.* 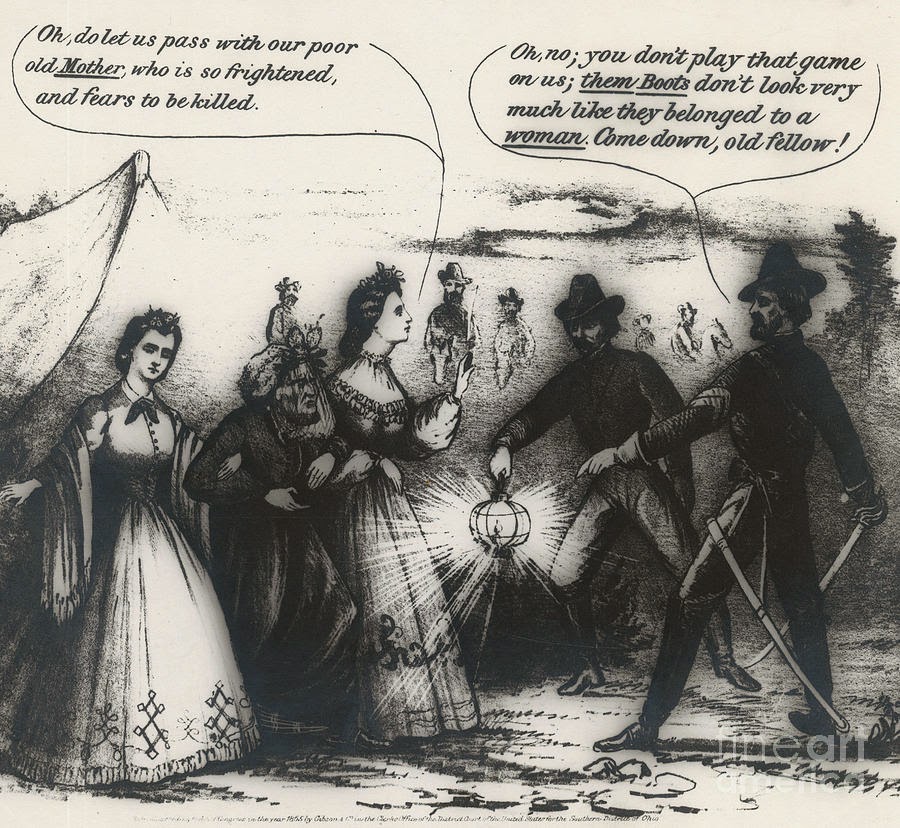 In the second version, Davis pulled the flowered poncho and a woman’s bonnet on while Varina woke one of the slave women and asked her to fetch water from the stream to wash Baby Piecake’s diapers. According to this version, Davis planned to slip out and away past any Federal pickets who might think he was a woman in the dark. Davis and the family’s “servant” left the tent with Davis disguised as a woman . . .  only to be caught by Federal troopers.**

In the third version, Davis, once he realized he could not get away, tossed aside the poncho and the shawl and tried to dismount an armed cavalryman from the ground, but was distracted by Varina who threw herself in front of her husband crying out, “You’ll have to shoot me first!”

To which the angry trooper answered, “I wouldn’t mind a bit.”***


However it happened, the President of the Confederacy was now in Federal custody. 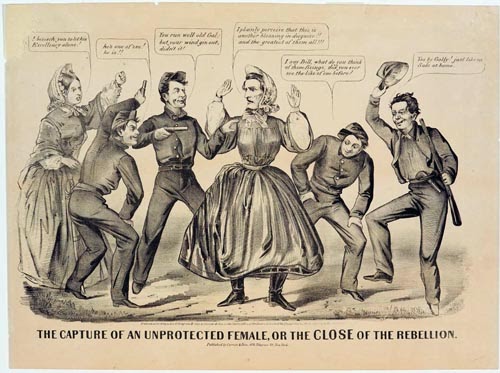 It’s said that Davis continued to be obtuse --- or heroic --- even after he was manacled and led off. He insisted on being called “Mr. President” (no one obliged him) and he insisted that all items subject to seizure be acknowledged with receipts made out to the “Confederate States of America” (no one obliged him here either). Given that he was, in Federal eyes a traitor and probably guilty of masterminding the shooting of Abraham Lincoln and last of all a coward for wearing his wife’s dresses (however the truth of that was), it was a miracle that the hardheaded Davis simply wasn’t shot to death that night.

Varina Davis at least recognized the danger, and begged to be incarcerated with her husband. She was ignored, and kept under guard separately. The Davis slaves were manumitted on the spot, and when some tried to linger, were driven off in the rain and darkness. 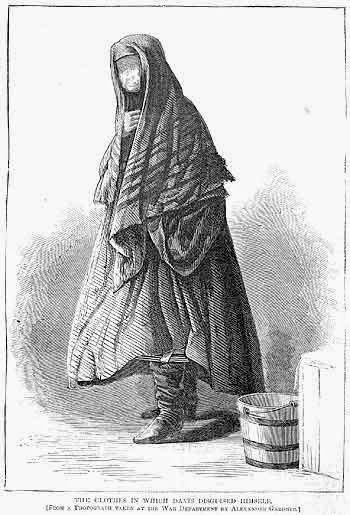 
When reports of Davis’ capture reached the Northern papers the Union had a field day with the story of Jefferson Davis fleeing in petticoats.**** Even several Southern papers made vicious mock of their now-discredited former leader. 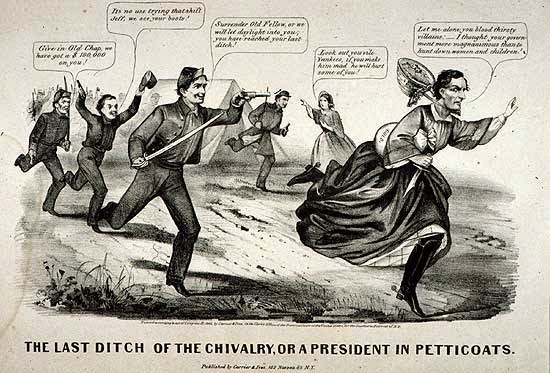 *The persistence of the story of Davis’ “cross dressing” episode makes it likely that he was wearing some item of female clothing when captured. Grabbing something of Varina’s was quite possible if not intentional. Imagine the confusion anyone would experience upon a sudden startling awakening in the early hours, in the pitch darkness of the Georgia countryside, and with driving hammering rain on the canvas of a tent. This scenario is by far the most believable, especially if one adds in the pyrotechnics of thunder, lightning, the fearful crying of children and some women, and the angry yells of men and screaming of horses.


**This version was developed after one of the Davis’ newly-emancipated slaves was interrogated by Union soldiers in the darkness. It’s easy to imagine the frightened and disoriented woman agreeing to just about anything demanded of her by white strangers with guns and sabres. According to the report, supposedly the slave and the disguised Davis were going to ask permission to go down to the nearby creek to fetch water for a diaper wash, whereupon Davis would slip away.  The story is simply beyond credence. Who, after all, would decide to wash diapers in the midst of a thunderstorm and cavalry raid at 2:00 A.M.? Who would think that such a strange excuse would pass muster with even the stupidest picket soldier alive? Where could Davis go, anyway, except to aimlessly wander the rural wastes of Georgia in a nighttime downpour? And even in the dark, Davis’ height, his light skin, and his goatee would most likely be obvious to any picket guard who bothered to have his eyes open on the job. Without a doubt, this story was manufactured to humiliate Davis. It even involves the detail of infant excrement.


***The third version is quintessentially Southern and noble --- perhaps too noble for a fifty six year old man blind in one eye and suffering from neuralgia --- even an old soldier like Jefferson Davis. But several witnesses do recall Varina’s defiant exchange with Davis’ first captor.


****Remember the furor over Lincoln’s surreptitious passage through Baltimore at the outset of the conflict and the derision he endured for the “Scotch cap” he had supposedly been wearing. By all measures, the mockery accorded Davis was far, far worse. 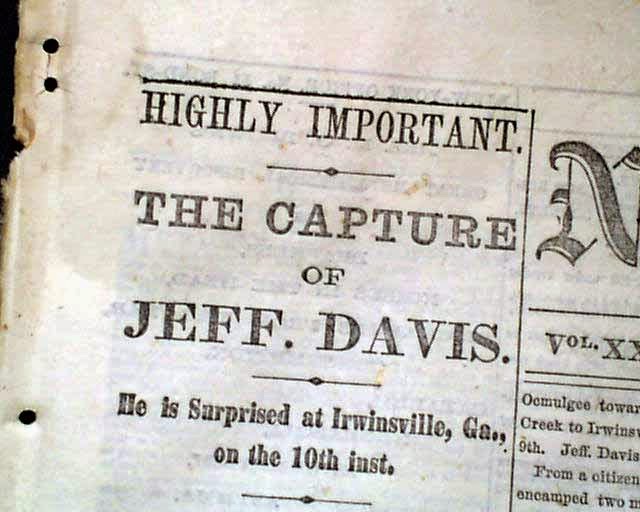 
William Quantrill, the notorious bushwhacker, is mortally wounded in a skirmish with Union troops in eastern Kentucky. Shot in the back while trying to flee, Quantrill is rendered quadriplegic. He lingers a month before dying. 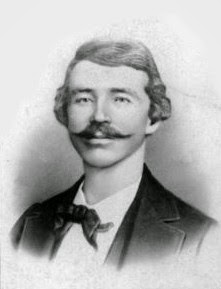